Would You Rather...  was one of my favourite books as a child.  It involved all sorts of awful options.  Like, would you rather... stay in a haunted house?  or run through a field of stinging nettles?  Ummm...  Of course I was that annoying kid who was always trying to negotiate: "well as long as it was only one night in the haunted house" or "that depends on how big the field of stinging nettles was".  Seems I was destined to be a lawyer. 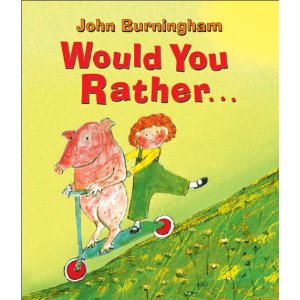 Lately I've been comparing horrible adult tasks to giving birth.  My darling sister sent me a coupon deal for a Brazilian bikini wax, suggesting thoughtfully that I might like to surprise the DH.  She obviously didn't give much thought to what a bald, post-partum vagina looks like.  It would be a surprise alright.  Perhaps just not a pleasant one.  But I digress.  I emailed her back: "I'd rather give birth than get a Brazilian."

And then I was at the dentist this morning, lying there, jaw and lips stretched out of all proportion, having my teeth cleaned and polished, the little grinder making that awful fingernails-down-blackboard noise thinking "I think I'd rather give birth than go through this again."  And I wasn't even getting a filling!  Or, heaven forbid, a root canal.

And I'm still traumatised by having seven-week-old Milkbaby immunised.  I think I'd rather give birth than do that again.  Or run through a field of stinging nettles.  Or even stay in a haunted house.  But those options weren't available, so he's fully vaccinated (See?  Sensible, old, wise Mama).

According to Wikipedia, Would You Rather is a party game.  I might try it at the next party I go to.  That'll be like, never.  So consider this a blog party.

What would you rather?
Posted by Island Mum at 6:35 PM