Co-sleeping, rather like breastfeeding, is another one of those controversial, damned if you do, damned if you don't-type topics.  There are a number of perspectives:
I've got a tendency to follow the rules.  With a fair degree of rigidity.  My Myers-Briggs profile says so.  So in the time Before Child, I thought there would be no question about where Milkbaby would sleep.  In his cot of course!  I know you're all smiling smugly at my naivety.  The very night he was born, he woke up after only an hour or two and a nurse came into my room and popped him into bed with me.  You can imagine my consternation at this blatant breach of government and probably hospital policy.  But I couldn't sleep anyway so it didn't really matter.

Once home I quickly discovered that Milkbaby slept much better when I was nearby.  And when I say "nearby", I mean right next to him, and he would say ideally with a nipple stuck in his little gob.  Nearly 18 months on, he's still the same.  I don't hesitate to bring him into our bed if I think it means we might all get some sleep.  And it usually does result in a couple of people getting some quality sleep - namely the DH and Milkbaby.

But me?  I'm the sucker stuck on the last 10cms of bed, with my arm stuck in a weird position and without a sheet, let alone a duvet, to cover me.  If I do get some sleep, it's certainly not quality, and I'm almost guaranteed to wake up with a krick in my neck or a dead arm.

So instead of running ad campaigns that are designed to fill you with fear - like this one from Milwaukee... 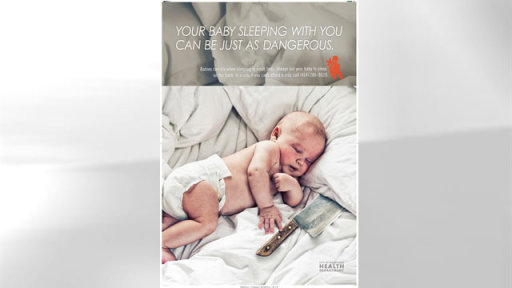 The government should just run a few public service ads which warn people of the most likely outcomes of co-sleeping (pah! what a misnomer).  Like this... 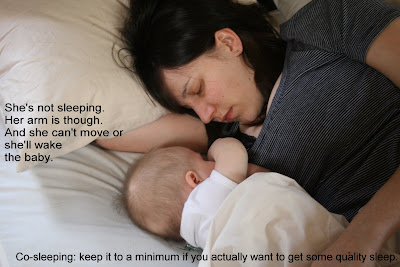