What we're reading: An Introduction to the Criminal Law

There are some books that, despite being remembered with fond glow of childhood, don't quite retain that same magic upon rereading as an adult - even when reread with an enthusiastic two-year-old.

Perhaps it's the politically correct mother in me, but when the Avocado Baby came straight home from the hospital and started eating solids, I was all "hey! what about the milk?" I'm sure Milkbaby was thinking the same.

Lately I had a similar experience after coming across The Elephant and The Bad Baby at the library.  It's about a baby who doesn't say please.  Picking up this book was strangely well-timed, as we also have someone in our household who can say any other word he cares to repeat, but he will not say please.  Even if his life depended on it, I am sure he'd just stubbornly hold his mouth shut, smiling innocently and waiting to be given whatever he's requested.

Back to my critique of The Elephant and the Bad Baby.  For a start, babies aren't bad. Just lacking in knowledge of the rules and a few social graces. And in this case, mislead by a large elephant.  And I couldn't help noticing that not only is this baby labelled "bad" from the outset, he's a flaming ginger - the only one in the book.

After a few reads (ie, at least fifty repeats), I realised it was basically an introduction to the principles of the criminal law, though thankfully (largely due to the baby's mummy's mad cooking skills) law enforcement officers do not have to get involved.

Theft, simpliciter - As you should have gathered from the short description above, this book is a rollicking tale of shoplifting, the elephant leading the bad baby astray and stealing ice-creams, pies, biscuits and all manner of tasty treats, supposedly on the baby's behalf. 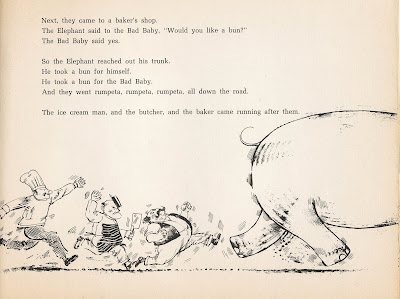 Defences to crimes - Is it entrapment? - What say the elephant is an undercover cop?  In criminal law, entrapment is conduct by a law enforcement agent inducing a person to commit an offence that the person would otherwise have been unlikely to commit.  However, there is no entrapment where a person is ready and willing to break the law and the government agents merely provide what appears to be a favourable opportunity for the person to commit the crime.  So, if the elephant is an undercover cop, did he induce the baby to commit a crime he wouldn't have ordinarily committed, or just provide an opportunity to commit the crime?  It's a fine line.  We know this baby's already bad, so perhaps the elephant was just the vehicle for the crime spree the baby had been planning for months.

The law of parties - It's more likely that these two are in cahootz.  The law says that if you aid, abet, incite, counsel, procure or somehow otherwise convince an elephant to go on a stealing spree (even if you do little more than ride on his back and eat the treats), you're in the gun for just as much time as the elephant.


Matters of justification or excuse - No person shall be convicted of an offence by reason of any act done or omitted by him when under the age of 10 years.  Explains why this story is delightfully consequence free: the Crimes Act doesn't apply to animals, nor to children under 10.  Even bad ones.


Alternative dispute resolution - If all else fails, invite everyone home for cups of tea and pancakes. The baby's mummy will cook. 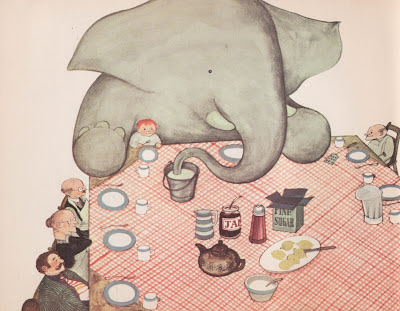