Virtual cacophony: how feminism and technology have given mothers a voice 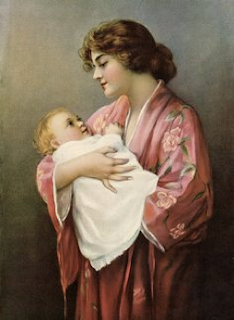 This week we're celebrating 125 years of Women's Suffrage in New Zealand.  It reminded me of this post I wrote a few years ago but never got around to publishing.  And now seems as good a time as any to dust the cobwebs off this poor neglected blog...

As I’m rocking my baby to sleep in the middle of the night, I think of mothers through time, doing the same thing.  I picture a cave-woman, a woman in the Middle Ages, a Victorian mother (garbed in a frilly nightgown of course) shushing in the ears of their babes, and hoping against hope that this might be the night for a good sleep.  When these women got together, at the Neanderthal, Middle Age or Victorian equivalent of playgroup, what did they talk about?  Did they examine their lot as mothers, comparing stories of their worst night’s sleep, exploding nappies, snot-covered toddlers, postpartum bodies, and absent fathers?

Or was lamenting a mother’s lot not the done thing?

Motherhood hasn’t changed much in the last few thousand years.  Sure, there’s more technology involved - but in general, once you have that baby in your arms, you are the latest in a very long line of women to experience the unique highs, lows and other-wises of mothering, bodily substances, sleep deprivation and all.

What has changed is our ability to talk about - and question - the mother position.  We have feminism to thank for that (as well as a few other things of course).  Far from being silenced by biological destiny, there is a whole army of women out in the blogosphere, writing about motherhood, challenging its depiction in the mainstream media and authoritative parenting guides through humour, honesty, advice, reflection and rebellion. While some of these mama-writers may call themselves mummy bloggers, others will detest the title.  You don’t need a cyber-ethnographic approach or techno-feminist lens to tell you that the title, unless reclaimed as a badge of honour, is diminutive, demeaning, dismissive and probably a few other d-words (if not to say reductive).  However, no matter what you call us, mummy bloggers are a large and powerful group. 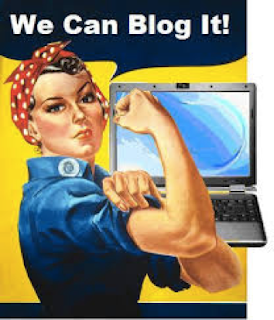 You might ask what’s so feminist about the modern (and very public and immediate) equivalent of publishing a mother’s journal.  A blog, though in a sense a journal, is the start of conversation.  It’s a shout into the void.  And without feminism, as well as the platform for launching our uncensored thoughts on the world, these conversations wouldn’t be happening.  And these are completely new conversations.  Conversations that women didn’t have before, with people they wouldn’t have previously interacted with, on topics that cover new ground.

It’s a virtual - and viral - cacophony.  While perhaps not truly ‘radical’, there’s something inherently rebellious about mothers writing publicly and usually very honestly about their experiences.  Not only do mommy bloggers “construct versions of their own motherhood”, but in doing so, they construct entirely new versions of motherhood, challenging traditional constructions, and creating communities of support for alternative motherhood paths.

I didn’t need to look too far to confirm my theory that these are new conversations.  I called the closest person to the Victorian era I could think of.  My Nana.  I asked her if she had friends she could talk to about parenting, or who else she turned to for advice.

“We didn’t really discuss that much at all.  You never sort of talked about how to do things with kids, you just seemed to go your own way.  If you wanted advice, you went to your mum.

I wouldn’t have talked about [parenting] with everyone, just family.  And sometimes you’d like to say to people, huh, husbands are a damn nuisance and if I could pack up and go, I would.  But you kept that to yourself.  You don’t always want to confide in people, even good friends.  I guess too, you seem to make a lot of friends when you have a child - coffee groups etc - that didn't happen in our day - we just didn’t make a lot of friends.  We didn’t have the same support networks.  Quite often your old friends fell away if they didn’t have children at the same time, or people moved away or didn’t have phones.”

So it seems they weren’t having these conversations back in Nana’s day.  I checked with my mother.  Nope, they weren’t either.  And frankly, neither am I.

I might share a funny parenting-fail story, or hint at the bewilderment and helplessness I felt after my second child was born (the feeling hasn’t passed, by the way), but it’s rare for us to talk, really talk, about the challenges of modern motherhood.

My blog, on the other hand, is a different story.  Like hundreds of thousands of other mommy bloggers, on there, buoyed by the false confidence of anonymity and by the reassurance that my known readership includes only my mother and a few friends, I am free to share what I like.  And through this vehicle, again like so many other mummy bloggers, I try to make sense of my position as “mother”.  It’s sometimes a one-sided conversation, but then, sometimes just getting it out there helps.

And what was once a relatively homogenous group of educated, white, middle-class bloggers is changing as fast as the internet is spreading.  A quick google reveals that mommy blogging is a ‘thing’ in any country that has good internet access.  Sure, it’s still predominantly a middle-class pastime, but that is changing too.  Dads are joining the party, and mothers in unlikely places are using blogs to connect, share and educate.  One example is China, which now boasts the greatest number of internet users in the world.  Chinese mommy bloggers are a fast-growing group.  Because of its seemingly innocuous subject matter, mommy blogging in China is considered ‘safe’ from the confines of political censorship.  Perhaps this is the best form of feminist subversion - so subversive that even its authors are unaware of it.

In one hundred years, what will future mothers think of mothers in this, the Internet age?  It’s my hope that our generation won’t be known for “the mummy wars”, or for attachment parenting, or even for that controversial Time magazine cover.  They’ll think “yeah, those mothers found their voice.”